A PlayStation Vita port of Arkanoid, developed in nine weeks, in a basic 3D engine written from scratch.

Stock Arkanoid power-ups such as size-shifting powerups and triple balls, are supplemented with new ideas such as striking the blocks with lightning through the touch screen and warping blocks around using the PlayStation Vita's internal gyroscope.

This project was made for an IGAD console programming class. It uses GXM (the PlayStation Vita's graphics API) for screen rendering with shaders written in Cg. It also uses the FMOD library for audio playback.

Besides being a programming project to get familiar with a game console's native API, the project also focused on gameplay programming, to provide not only an effective but also fun demo. The Arkanoid game was made diverse with 8 different 'stages' and 8 different power-ups, some of which were designed to make creative use of the PlayStation Vita's various unique input capabilities. One power-up would destroy blocks by tapping the touch screen, one would move the blocks using the internal gyroscope (including the ability to smash a row of blocks into a wall to destroy them), and one would split the paddle into two that could be controlled individually with the PSVita's two control sticks.

The teacher for this course brought this demo to a meet-up with teachers of other schools and Sony officials; reportedly, they were impressed by this project (among other IGAD student projects). 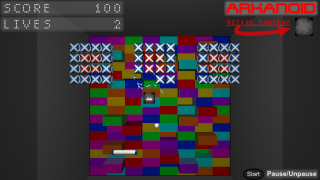 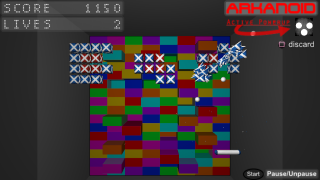 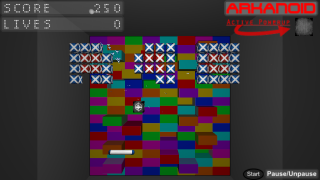